Migrant Entrepreneur of the Year

The Immigrant Entrepreneur of the Year Award competition aims to give the stage to entrepreneurs who have moved to Finland from abroad and showcase their input in the Finnish business scene. 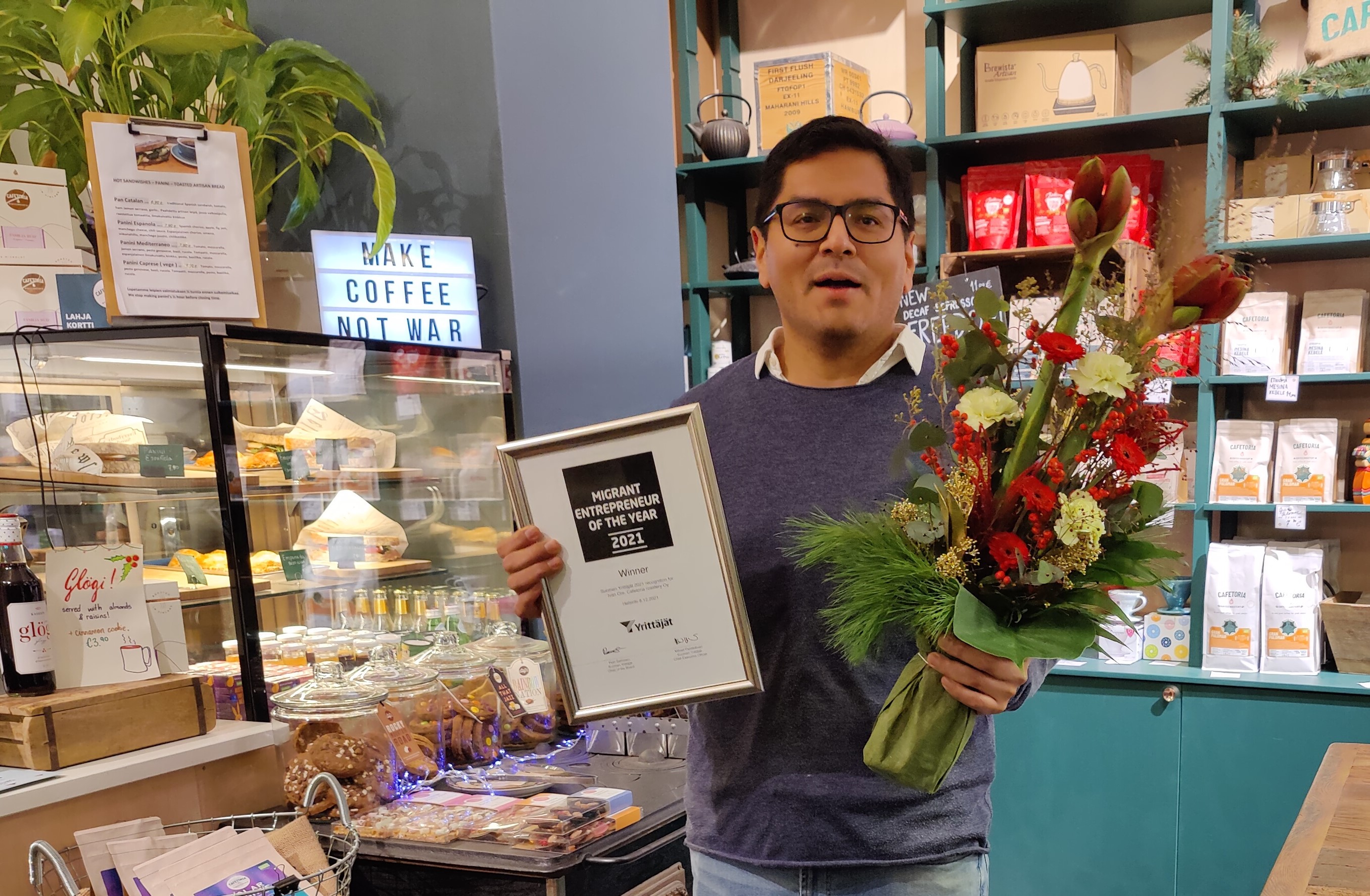 Ivan Ore is the Migrant Entrepreneur of the Year 2021

The winner of the Migrant Entrepreneur of the Year award is Ivan Ore, originally from Peru. Ore’s company is Cafetoria Roastery Oy, based in Lohja. The other finalists were forestry entrepreneur Eduart Shehu and experience travel provider Theo Turner.

Ore has also launched his own Cafetoria Roastery coffee brand. In addition to the roastery in Lohja, the company has coffee shops in Helsinki and Espoo.

Ore moved from Peru to Finland over 20 years ago to study engineering, and after graduation he worked at Nokia for almost 12 years as a research engineer. When Ore visited his native country during that time, he got to know Peruvian organic coffee farmers. He wanted to import the coffee to Finland and at the same time help the coffee growers secure a more reliable income.

Ore started out as a part-time entrepreneur, registered as a sole trader while still in employment, and began importing and selling coffee, first raw and then in the form of organic coffee he had roasted himself. When Ore and his wife began running the business full-time in 2012, they registered the Cafetoria Roastery Oy company.

The jury was particularly impressed by Ore’s dedication over the long term to expand his business and make his dreams a reality. The company has grown and operated profitably.

“With the competition, we got to see inspiring entrepreneurial stories, and Ivan Ore has shown great perseverance and courage in his actions. There are great examples of migrant entrepreneurs, which we want to highlight and at the same time encourage others to take a leap and become entrepreneurs,” says Marketing Director Joni Tikkanen from pension insurance company Elo.

The jury felt that Ore’s story, business strategy and profitable business deserve recognition with the Migrant Entrepreneur of the Year 2021 award.

In addition to serving great coffee, the company wants to help foreigners find employment in Finland. People from over 13 countries have worked at Cafetoria Roastery over the years.

The Migrant Entrepreneur of the Year contest aims to present migrant entrepreneurs and highlight how important they are to our everyday lives. 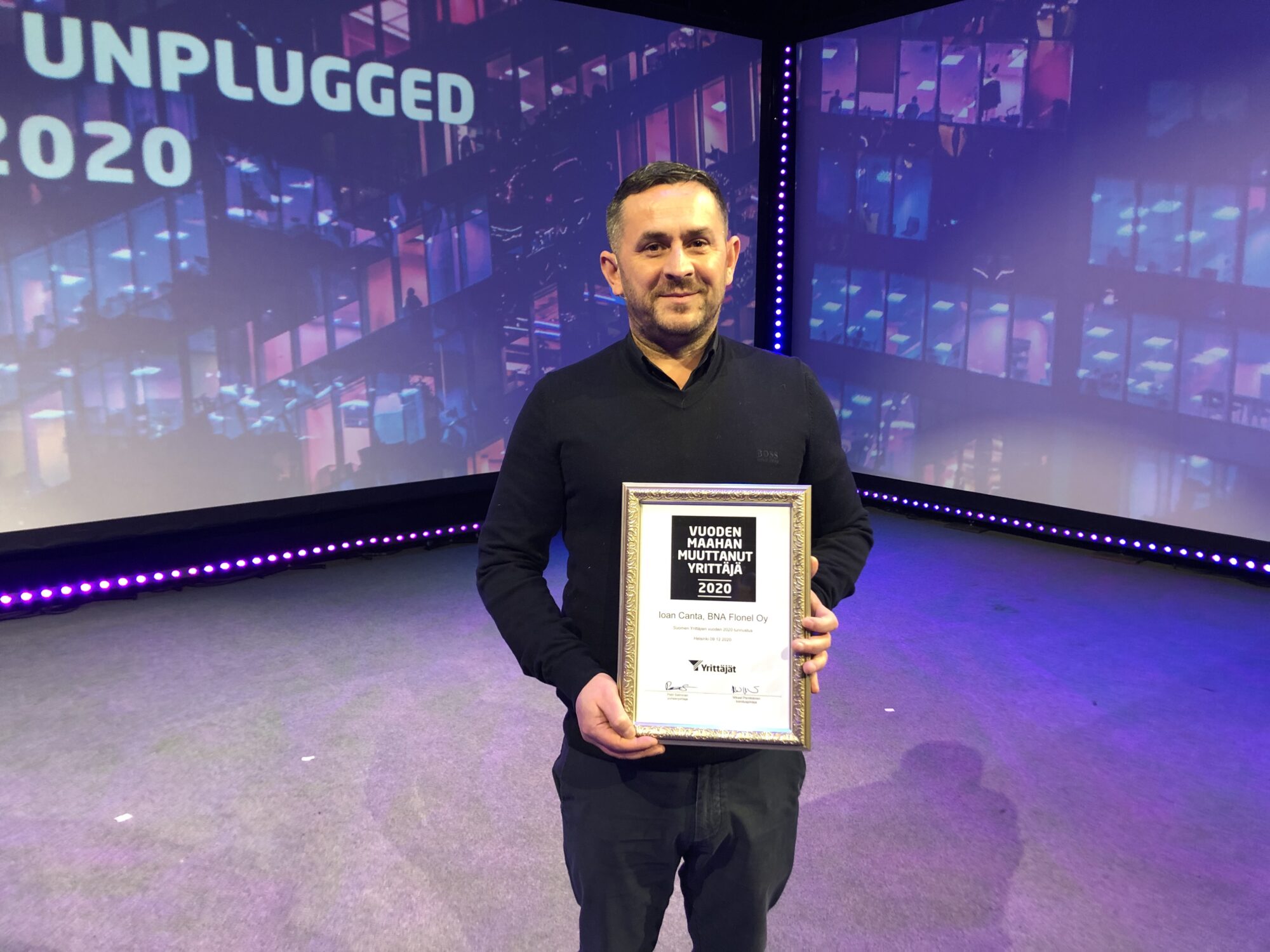 Ioan Canta, originally from Romania and the owner of the company BNA Flonel, was chosen as the winner of the competition in 2020. The jury was particularly impressed by Canta’s hard work over many years to grow his company. BNA Flonel began with domestic cleaning services and then expanded to office cleaning, construction cleaning and removal cleaning. The company also provides labour-only building contracting, protective materials and contractual labour. The company has consistently grown and operated profitably. It has a staff of 45.

The company’s employees have enjoyed working there for many years. Canta invests in corporate social responsibility by supporting causes such as disabled children and their families through the Finnish Association of People with Physical Disabilities and cancer research.

Canta has faced prejudice because of his Romanian background and has had to work twice as hard to grow his business and build his clients’ trust. The jury felt that Carina’s story, attitude, business strategy and corporate social responsibility deserved to be recognized with the €5,000 prize and the title of Migrant Entrepreneur of the Year 2020. 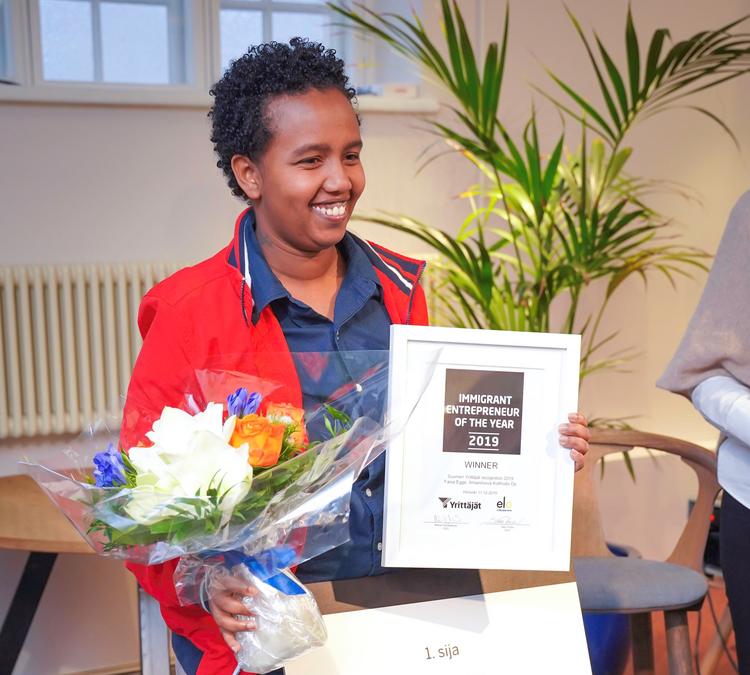 The Immigrant Entrepreneur of the Year 2019 award was given to Faisa Egge, from Central Ostrobothnia, the founder of Amanihoiva Kotihoito Oy. The other finalists were Rajkumar Sabanadesan of Kaksi.nolla Oy from Pirkanmaa and Douglas Castro of Darkglass Electronics Oy and Neural DSP Technologies Oy from Helsinki. Almost a hundred entrepreneurs from all over Finland were nominated for the award.

“The strongest argument in Faisa Egge’s favour was her story of coming to Finland, educating herself and becoming an entrepreneur. I also value the fact that she operates in a city that is not very large. Immigrant entrepreneurship can also be found outside the handful of big cities,” says chair of Suomen Yrittäjät and jury member Jyrki Mäkynen in explaining why Egge won.

The winner received a cash prize of €3,000. The funds were donated by pension insurance company Elo.

“Faisa Egge has commendably brought the light and positivity of the culture of her former homeland to a sector which needs more skilled, motivated labour. Egge’s hard work, her caring approach towards people and the positive attitude she has learned back in her childhood represent just the kind of entrepreneurship we want to highlight through this competition,” says Satu Huber, CEO of pension insurance company Elo.

To Finland with two suitcases

Faisa Egge came to Finland in 2008 from Kenya with just two suitcases. She started her career collecting bottles for refunds and working in a pizzeria. She studied to be a nurse, but finding a permanent, full-time job was difficult. So she took a risk, said goodbye to on-and-off employment and became a full-time entrepreneur without any experience of the world of business, where the red tape was of a completely different order to that in her homeland, Kenya.

Her company offers home care services for the elderly and personal assistance to the disabled in their own homes. The business, which began in 2012, became a limited liability company in 2015 and now also employs other immigrants in the care sector. The company is growing its profits, customer base and employee numbers year by year in Central Ostrobothnia.

As well as running her business, Faisa Egge has been active in her community and has stood for election in the municipal elections in Kokkola.

A finalist with world stars as clients

The jury had to make a difficult choice between three business owners whose businesses vary greatly in nature and in size. Both Sabanadesan’s and Castro’s businesses are growing strongly, with a good turnover and effective business concepts.

The bass gear made by Castro’s company, Darkglass, are sold worldwide and the company’s clients include several big international names. The company has found its niche, in which it does business globally.

Sabanadesan’s Kaksi.nolla Oy caters to a range of societal needs by offering senior services, catering and meal services, in addition to training and consulting. Sabanadesan himself is a change management expert and has grown his company’s field of operations profitably.

The features that were highlighted in choosing the immigrant entrepreneur of the year were profitable business operations, growth opportunities, the strength of example and attitude.

An open application was used to find candidates who had been successful and created something new in spite of language barriers and a different business environment. Almost a hundred candidates from all over Finland were nominated.

Entrepreneur of the Year